Writing a book is a privilege; sharing it with others, for me, is a necessary pain, the end of a process, the final death, and also the beginning of promoting this thing I’ve already spent nearly two years wringing my hands over. Submitting a manuscript to agents, again and again, for review and probable rejection, is privately painful–just ask J.K. Rowling and Kathryn Stockett, because rumor has it, theirs, and lots of other extremely successful manuscripts, were rejected many, many times before being embraced by agents, publishers, readers and filmmakers. These authors are talented and patient, they don’t give up, they trust in tradition–the traditional publishing machine–and possibly fall into some fairy dust, or other sparkly lucky magic, along the way to becoming widely read, financially successful authors. I am not against the process of traditional publishing–I am in awe of it, in fact. Self-publishing is a new frontier, though, and with Expecting, I just couldn’t resist giving it a try.

Self-publishing a book is thrilling and gratifying, but it also has the potential for public embarrassment (though I’m not looking for pity for my first world problem!), which is why I am so grateful that my book club chose to read Expecting for the month of March; we met on Wednesday, March 14th to discuss it. Of course, they’re my friends, which means they’re not exactly unbiased, and while I believe there is a book for every person, every book is not for everyone. I do know that the intelligent, educated women of varied backgrounds in my book club don’t agree on all the issues in my book, and I tried, as much as possible, to keep that in mind while writing Expecting. The purpose of my writing has never been to alienate, but to entertain while inviting a thoughtful examination of values and choices. On Wednesday night, after eating a boatload of seriously delicious food and drink, we had a thoughtful, lively discussion about Expecting, and about being women in a country that is increasingly hostile to women. It feels so right to sit in a room full of WOMEN talking about women’s issues. Let’s make a collective choice to get more women in leadership roles in America so that the dialogue on women’s issues in Washington never excludes women again. Ever. At this point, we can’t afford not to. 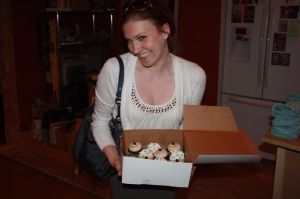 M working magic in the kitchen! 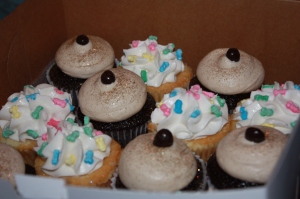 Take a closer look at those cupcakes! LOL!